Art and fashion meet in the 1960's in the form of Op art and Pop art. Pop art and Op art were separate art movements but the public mixed them, much to the annoyance of the founding artists. The term Op-art was first coined by Time magazine. It was typified by the dramatic, trick-optic effects of line and contrasting areas of color. 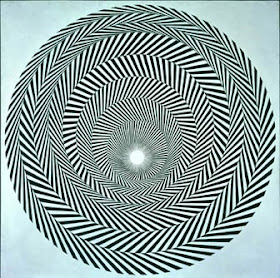 Op Art was a term coined in 1964. Optically distorted geometric patterns in black and white produced a whole range of movements on a surface. When applied to fabric it created a new bold look in fashion and accessories. Op Arts primary goal was to fool the eye. Bridget Riley’s dazzling black-and-white paintings triggered an ‘op art’ fashion craze in the 1960's. Victor Vasarely was also an influence. Op's greatest moment was the "The Responsive Eye" exhibition at the Museum of Modern Art in 1965. 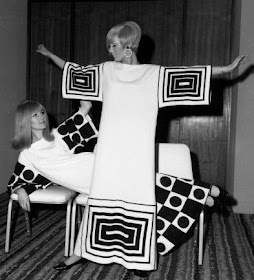 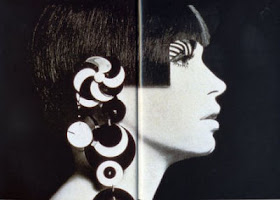 Pop Art was an art movement and style that had its origins in England in the 1950's and made its way to the United States during the 1960's. Pop artists have focused attention upon familiar images of the popular culture such as billboards, comic strips, magazine advertisements, and supermarket products. 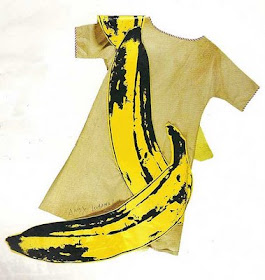 The original Pop art fashion movement was both political, in that it challenged the domination of couture and bourgeois status dressing, and an artistic reaction to abstract art and design, with the satirical and ironic use of advertising and of representational everyday objects. 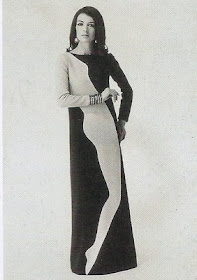 Early Pop Art in Britain was a matter of ideas fueled by American popular culture viewed from afar, while the America artists were inspired by the experiences of living within that culture. Pop Art therefore coincided with the youth and pop music phenomenon of the 1960's, and became very much a part of the image of fashionable, 'swinging' London. 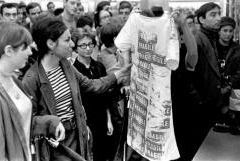 Some freelance designers took their inspiration from sources of contemporary art and graphics like Andy Warhol's Pop Art images.Warhol influenced fashion, and Yves Saint Laurent certainly went down the pop art road with his Mondrian dress and the black and white block sheaths he introduced in the early 1960s.Brightly coloured large-scale geometric repeats were favourites for both dress and furnishing fabrics. 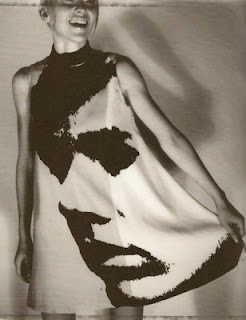